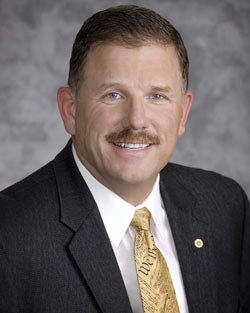 Councilmember Jerry Pentin was elected to a four-year term of the Pleasanton City Council in 2012 and has been actively involved in local government since 1997. Prior to his election on the City Council, Mr. Pentin served on the Planning Commission for four years and chaired the panel in 2012. From 2003-2009, he was a member of the Parks and Recreation Commission, which he chaired in 2007.

An avid cyclist, Councilmember Pentin applied his interest and knowledge from that perspective as a member of the city’s Bicycle Pedestrian Advisory Committee from 2007-2012. He has also participated on numerous city task forces and advisory committees the Firehouse Arts Center, the Golf Course Committee, Downtown Arts, Veterans Hall Renovation and Re-dedication, Downtown Hospitality, and Kottinger Place Redevelopment. He has also served as a Director on the Pleasanton Cultural Arts Foundation, President of the Pleasanton North Rotary Club and President and Chairman of the Board for the Junior Golf Association of Northern California.

For more than three decades, Councilmember Pentin has been the Owner and Principal of Spring Street Studios HD in Pleasanton, where he produces and directs documentary, corporate and environmental program media for web and broadcast.

Councilmember Pentin has an Associate of Arts degree in Radio and Television Broadcasting from Chabot College in Hayward graduating with highest honors. He is also a military veteran having served in the United States Marine Corps, ’76-80 as a Logistics/Training Sergeant for Marine Air Weapons Training Unit – Pacific (MAWTUPac, 3dMAW) at MCAS El Toro, MCAS Yuma MB, NAS Alameda.